A DAY AT EUPEN & VENNBAHN

I stumbled across Vennbahn when I was zooming in and playing with Google Maps trying to discover places to visit. I was looking for the towns located at the farthest ends of Belgium, close to the country’s border and I saw this strange border. Just that the line appeared much thicker than usual and when I zoomed in, I saw 2 lines on the border! When I zoomed in further there was a thin strip of Belgium with Germany on either side - that was Vennbahn. This strip was in RAVeL network, so I decided to go there on a biking trip via Eupen. 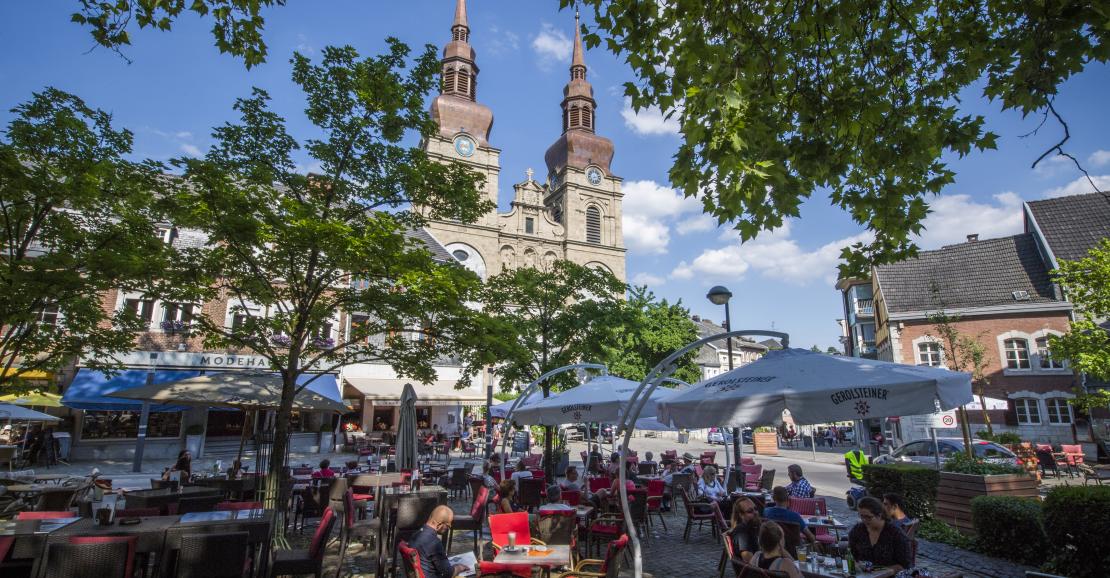 From Brussels, I took a direct train to Eupen and there are quite a few things to do in Eupen itself before I could begin biking. I started with a walking tour of the town centre of Eupen. After picking up a map at the Eupen Tourism Office, my first stop was St.Nicholaus church. The oldest parts of this church date back to the 13th C, though most of the architecture belongs to 18th C CE. My next stop was the Franciscan Abbey built in mid-18th C CE, which currently houses a senior centre.

My next stop was the sculpture of ‘The Clown’. It reminded me much of ‘Manneken Pis’ in Brussels. He is often seen sporting different outfits but the day I went, he wasn’t though. Close to this is another modern sculpture called ‘Ship’ and then is the ‘Friedenskirche’ or the ‘Peace Church’. Further ahead is yet another church of St.Catherine which I skipped. The town is filled with so many historic buildings from merchants houses to mansions, all built in 18th C CE. Soon I was back in the town centre at the Town Hall. The Rathaus (town hall) had once been the Abbey and Church of the Capuchin order, built in 18th C CE.

I picked up my bike from the Eupen tourism office and headed to Raeren and left the last stop in Eupen town to the end of the day - the Parlament der Deutschsprachigen Gemeinschaft. Unlike the rest of Wallonia, which is primarily French, Eupen, being at the German border, is primary German! Most of the population here speaks German and the German parliament of Belgium is here in Eupen. However, it isn’t possible to visit the parliament. On the way from here to the town centre, is yet another church of St.Joseph. I must say, there are quite many churches for a town of this size. Well! 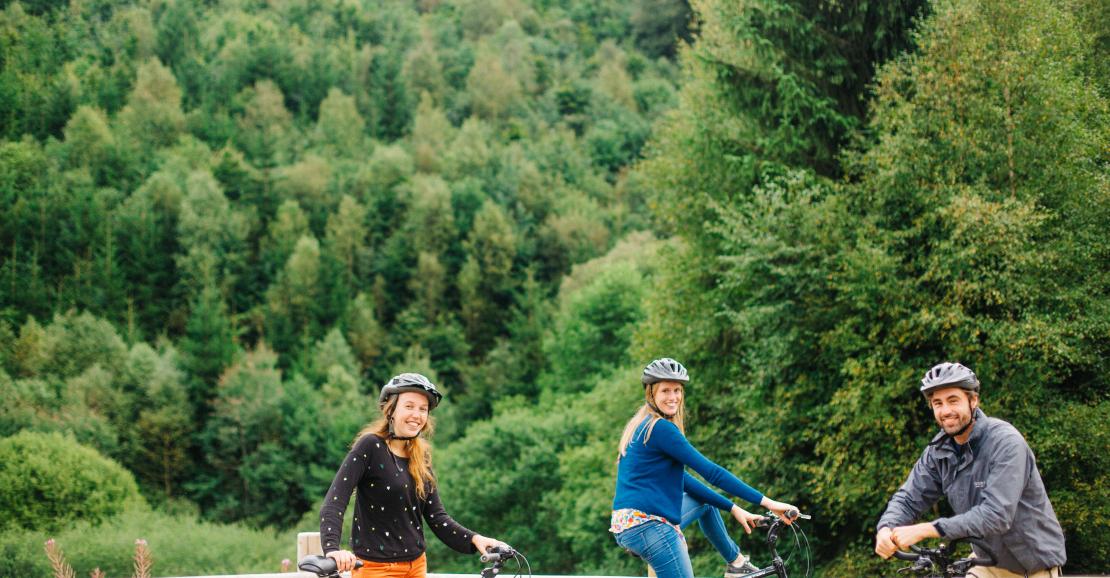 From Eupen, I headed to Raeren via Katherinenweg which then connects to Vennbahn. Bahn in German means railway and VennBahn was a part of the railway network. This railway line historically connected Aachen and Luxembourg and was used to transport coal. In course of time as other modes of transport were used and the usage of coal also declined, slowly this railway line fell into disuse! By 2001, this line was completely abandoned. Before that, when the borders between Belgium & Germany were drawn, since this railway line belonged to Belgium, it continued to stay with Belgium and the border was drawn around it! That is why there’s a strip of Belgium in the midst of Germany. In other words, there are enclaves of Germany in Belgium!

The Vennbahn path that connects Aachen to Luxembourg is 125km long and this path is almost entirely RAVeL, meaning there are very few places where you’ll encounter cars or other traffic and the terrain is flat as well. So, it is an excellent option for novice cyclists & children to try their hand on the bike. In certain places the defunct railway line has been removed and the RAVeL has been laid and in some places the RAVeL run besides the railway line. The path is a mix of wooden areas, grasslands and towns coming up once in a while.

Since it is not possible to drive a car on RAVeL, one option is to choose a loop route from Eupen for biking. Another option is to bring the bike on train till Eupen and after biking, take the return train at another location, like Coo. 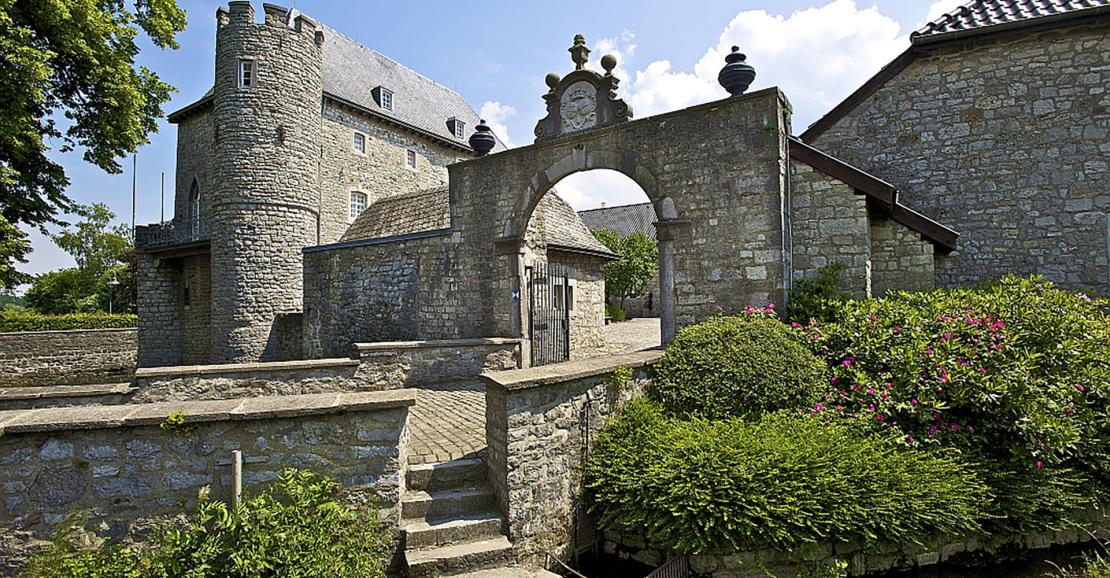 Before reaching Vennbahn, on the way, I stopped at Raeren. There are a couple of places to visit in Raeren. First, I did a quick stop at Schloss Knoppenburg, a 16th C castle, which is now a private property and cannot be visited. Then I stopped at the Pottery Museum of Raeren which is housed inside Raeren Castle. This castle was originally built in 15th C CE, but then rebuilt & renovated in 16th C CE. From the ancient Roman pottery to the German pottery of the same era to modern pottery, the place is an absolute delight, especially for those who are interested in art history. Apart from the examples of pottery, there are also explanations about how pottery was fired and glazed in historic times. There were miniature models of historic kilns too.

I was a bit intrigued about why a pottery museum was set up here and I got the answer in the museum as well. Raeren was known for its stoneware and pottery craft. It was used worldwide! While these stonewares were transported by horse carts as far as Germany, Spain & England, later on, during colonization those were used for storage in the ships and were transported to America, Africa & Asia! 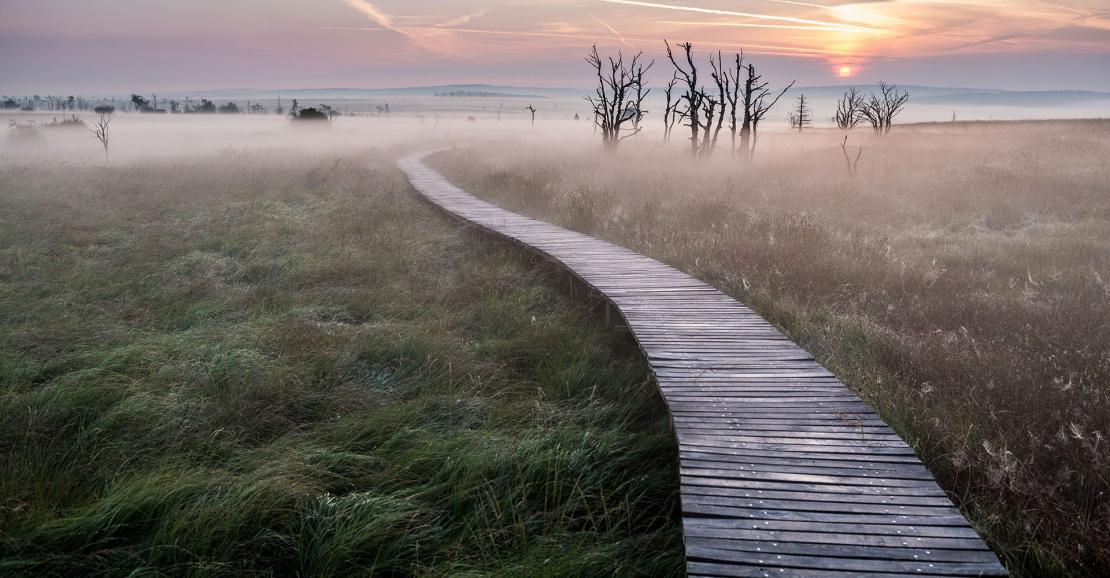 From Raeren, soon I was on the Vennbahn and I was on the strip of Belgium with Germany on either side. The path was peaceful with serene greenery and in the midst of the Hautes Fagnes. At the end of the first enclave of Germany in Belgium, at Petergensfeld, the path I was following, got out of Vennbahn and got into the forest of Haute Fagnes towards the dam of Vesdre. It was such a dense forest that at times even cell phone signal wasn’t available. Apart from the greenery, there were so many little streams making tiny waterfalls everywhere. It was so beautiful, in the lap of Mother Nature, in absolute peace and tranquility. Though the cellphone signal failed at times, riding on the waymarked, node-to-node path made it very easy. I took out the phone only to click pictures and not to see directions. Some portions of the route were paved while some were dirt tracks and some others were gravel roads. It is definitely a good idea to take a mountain bike on this route.

Halfway between Petergensfeld and Eupen, the river Vesdre (die Weser) kept me company and soon I was at the Reservoir Dam of Eupen lake. Eupen Lake is the confluence of river Vesdre and river Getzbach and is the primary source of drinking water for the town of Eupen. There are quite a few benches and laid grass, around the dam, to pause and relax. I got to see so many swallows here and it was so relaxing just to watch nature blending with and making man-made structures, its home.

LAST STOP - BACK IN EUPEN

Since I visited Vennbahn on a day trip, I was back in Eupen that evening to return my bike, finish the rest of the Walking tour of Eupen Town and then take the train.

If you are in Vennbahn for a day or two, it is very much possible to hire a bike at Eupen and go on one of the loop routes. For a longer trip, it might be a good idea to bring your own bike on the train, instead of car, so you can do a linear route without having get back to Eupen to get your car. 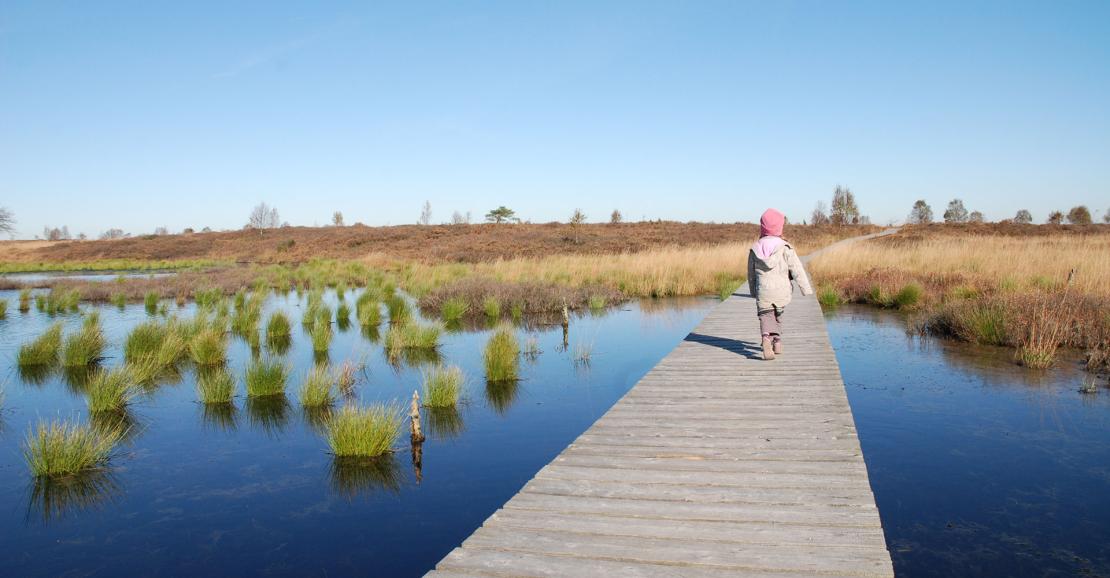 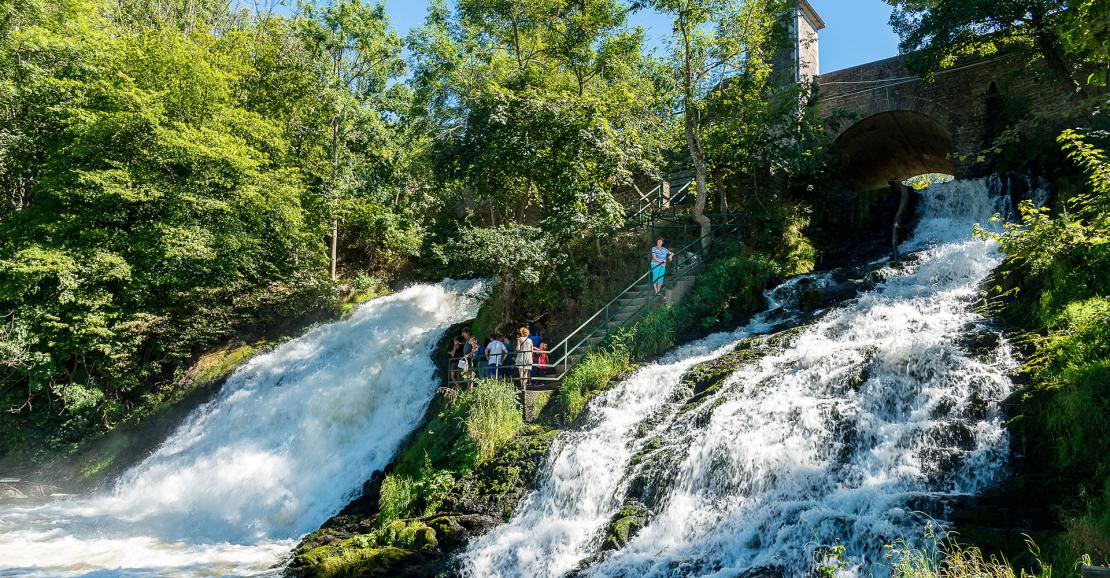 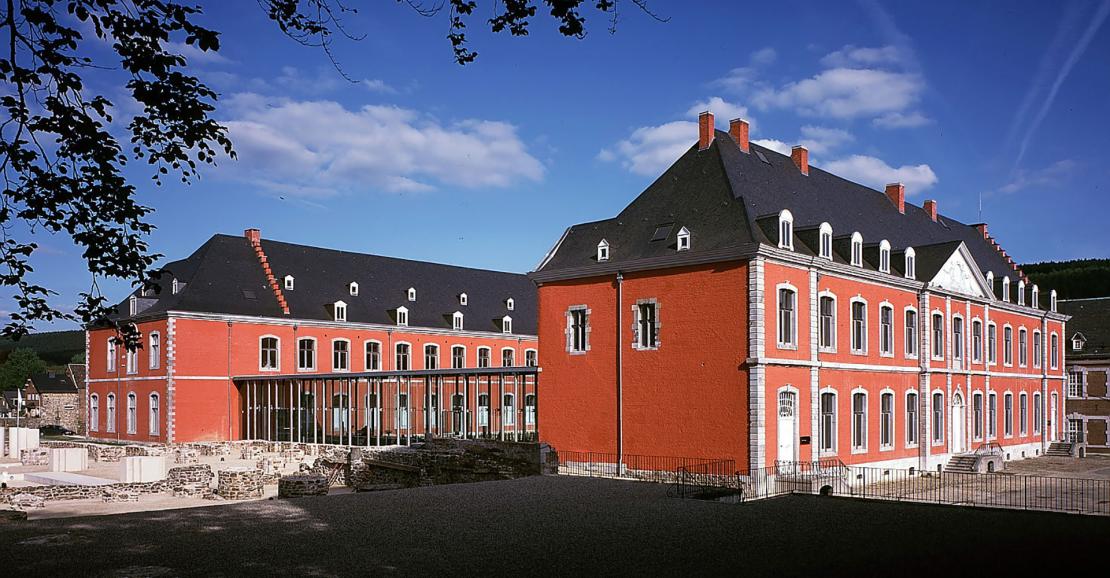 Stay at one of the charming B&Bs at Leykaul

This part of the route from Laykaul to Eupen is very hilly. The first part till Mont Rigi is a very uphill with about 200m incline in less than 15km while Mont Rigi to Eupen is extremely downhill with 400m+ incline in another 15km distance! The first half of the day can be very tiring, but don’t worry it gets much easier after Mont Rigi. Hiring an e-bike is a good idea to do this route. Signal de Bortrange is the highest point in Belgium at 694m. There are quite a few hiking trails here and it is possible to leave the bike at the parking area at Mont Rigi and hike to Signal de Botrange. Do keep in mind that from Mont Rigi to Eupen, is not RAVeL but the National Highway N68. There is no dedicated biking path, so make sure to wear enough visibility gear to help the cars spot you!

3 DAYS IN VENNBAHN (not a loop route):

Stay at one of the charming B&Bs at Leykaul

After Leykaul, continue on Vennbahn further south. Close to Waimes, the path splits and one continues southwards as Vennbahn while RAVeL no:45 goes towards Malmedy. Take it and head to Malmedy. Spend the rest of the day in Malmedy visiting Baugnez 44 Memorial centre, Malmundarium, walking through the historic centre of Malmedy etc. By late afternoon continue on RAVeL no: 45 to Stavelot.

A bit before reaching the town centre of Stavelot is the hotel Le Val d’Ambleve. It is a charming hotel with a beautiful mix of traditional décor with modern amenities. There are only 24 rooms which makes it a personal, intimate experience. There’s also a wellness area with steam room and sauna on the roof with an exceptional view of the Valley of Ambleve! The food requires a special mention. The restaurant is nice with the garden view, but it is also nice to have a room-service dinner and eat it on your own balcony. The food is generally French cuisine and is prepared with local produce. The taste was absolutely divine.

Stavelot is the home to the historic abbey of Stavelot since 8th C CE which currently houses 3 museums. Explore them as well as the town centre of Stavelot for half a day and head to Coo. The RAVeL ends at Trois Ponts and then the last 2km is on Avenue Pierre Clerdent. The majestic waterfall of Coo is right there at the heart of Coo. There are quite a few options for the things to do in Coo in half a day including hiking, Coo Adventure, Coo Wildlife Park, Plopsa Coo etc. At the end of the day, head to the Coo railway station which has a train to Liege and then head back home. If you had left a car at Eupen, you’ll have to take the train to Liege and then another train to Eupen.

About the Author: Bhushavali is an Indian travel blogger, currently living in Belgium. Her background in art-history gives her the interest and insight to explore the historic & heritage sites in Belgium. Her primary interest is UNESCO Sites and she has visited 14 of the 15 Belgian UNESCO World Heritage Sites as well as the UNESCO Global Geopark. Visit her blog here: My Travelogue by Bhushavali.