When I moved to this country, one of the most recommended places to visit in Belgium was Belgian Ardennes. When I tried to find more information on it, I understood that it is a very vast region and it includes Famenne Ardenne, a portion of the region that is listed as a UNESCO Global Geopark. Over time, I managed to visit this region on multiple day trips and weekend getaways. The whole region under UNESCO Geopark Famenne Ardenne is a combination of 8 municipalities.  So, here are the best places to visit in UNESCO Geopark Famenne Ardenne.

For any place to be listed as a UNESCO Geopark, it must be an extraordinary geological marvel and here in this La Calestinne region, the reason is Karst Phenomena. The first factor is that this entire belt lies in the valley of 3 rivers - Ourthe, Lomme and Lesse. The second factor is the abundance of soft rocks in this region like limestone. The combination of these two results in easy erosion of the rocks called Karst Phenomenon which in turn, creates some very interesting geological formations like caves, rivers flowing underground, unusual rocks and more. 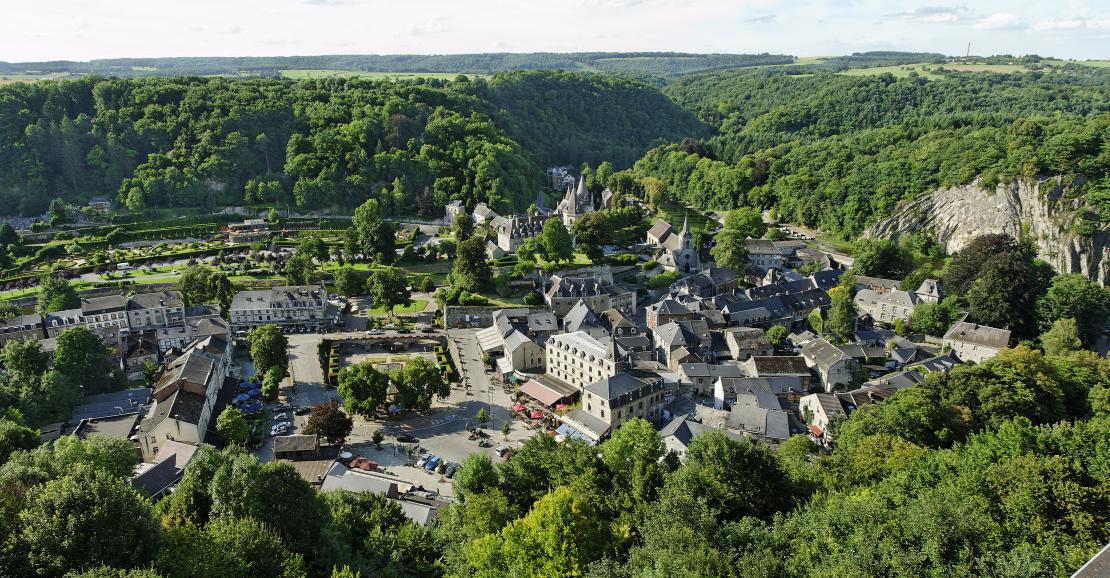 During the medieval times, Durbuy was raised to the status of a city in order to improve its fortifications, which made it, the smallest city in the world then! Though it isn’t so anymore, the historic city of this town (Durbuy Vielle Ville) is so charming and is worth a visit. One of the most fascinating geological marvels of Geopark Famenne Ardenne, the Anticlines are here in Durbuy, not 1 but 2.

This tiny little town is easy to explore on foot but after that, take your / hire a bike and head out to the little villages/towns around. Weris is one of the most important prehistoric sites in Belgium with quite a few Dolmens & Menhirs in a small area. There’s the Les Megalithes biking route to see all the spots. The museum Le Musée des Mégalithes de Wéris explains all about how the prehistoric people lived and what they did.

It is even possible to spend an entire day in Adventure Valley, Durbuy with its gazillion adventure activities. While you’re in that direction, don’t miss Chateau de Petite Somme, a majestic castle surrounded by the greenery of the Belgian Ardenne hills, that houses the Hindu temple of Radhadesh. 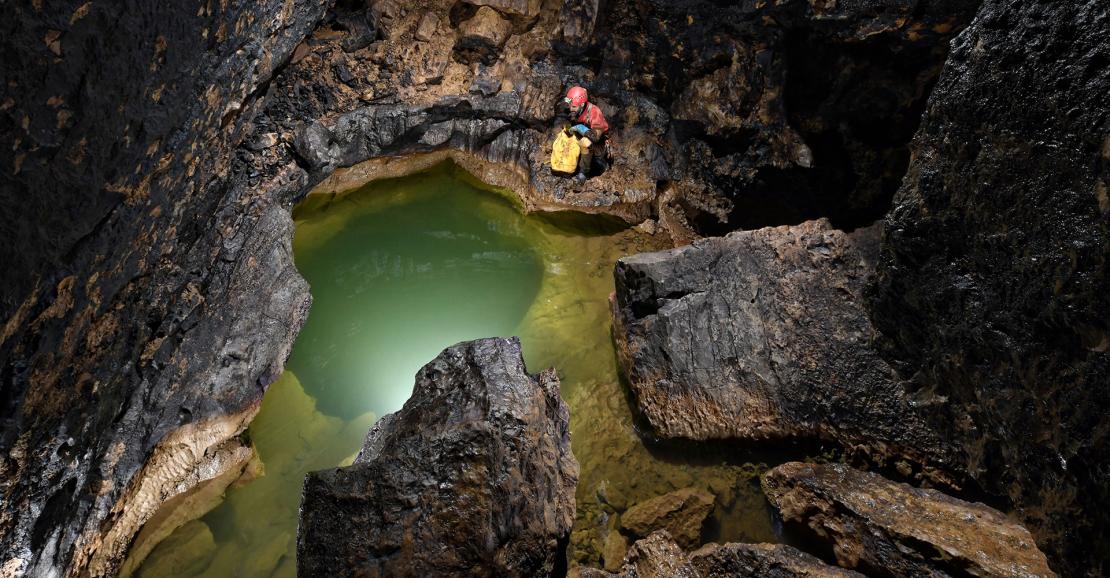 Hotton is a very small town with some very interesting rock formations. The Rochers de Renissart is considered to be the best place for rock-climbers in Belgium. The vertical rocks here, over the river Ourthe is such a gorgeous thing. Even if you’re not into rock-climbing, it is worth a visit to Hotton, and hike these rocks from behind. Apart from the Rochers de Renissart, there’s the Grottes de Hotton (Hotton caves) and RIVEO centre which is all about the 3 rivers in the region and their biodiversity. Grottes de Hotton is considered the most beautiful caves of Belgium, for its spectacular stalactites & stalagmites formation and exquisite chambers in the depths of the caves.

Just in the outskirts of Hotton is Ny, one of the charming, adorable, beautiful villages of Wallonia. It is in fact listed as one of the Plus Beaux Villages de Wallonie. 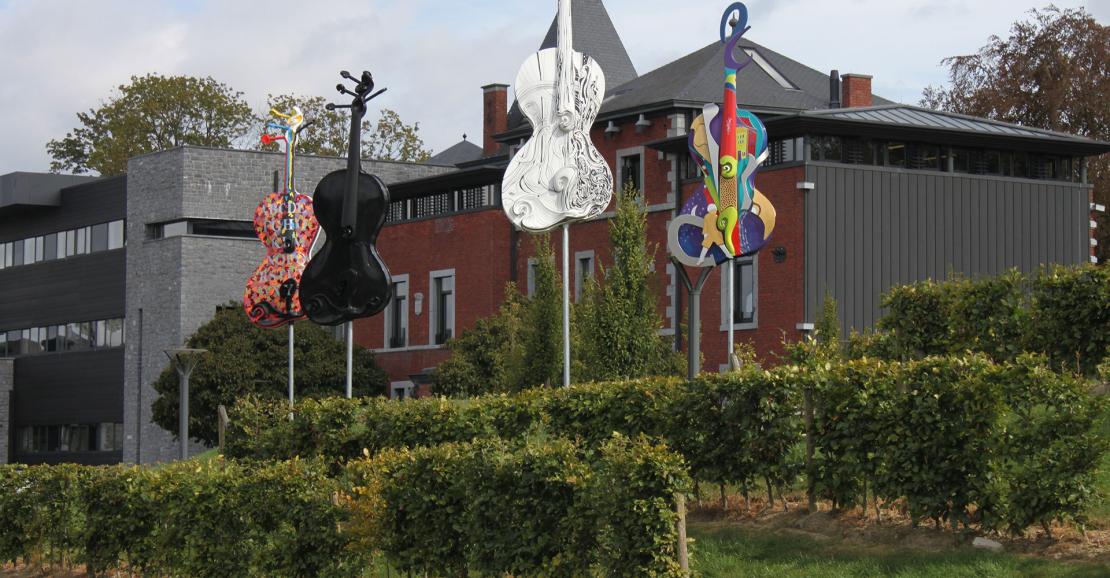 Marche en Famenne is considered the unofficial capital of Marche-en-Famenne region. It is an ideal, central location to stay for a few days and explore the region on multiple day trips including Hotton, Han-sur-Lesse, and even places like La Roche en Ardenne which aren’t in the Geopark territory.

The most important of the places to visit in Marche en Famenne are, Fond des Vaulx and Saint Etienne Church in Waha. Apart from those 2, the other interesting things to do in Marche are to visit the Famenne & Arts Museum (FAM) and go on the Street Art tour of Marche. The whole town feels like a restored historic site and it feels like the whole town froze in time a few centuries ago. After all, Marche won the EDEN award in 2011.

Fond des Vaulx is an exceptional feature of the Geopark Famenne Ardenne region. It is the hiking path to reach Trotti aux Fosses, a 28m deep vertical cave and the best part, a river runs in its depths! The village of Waha is located on the outskirts of Marche and is the home to Saint Etienne church. This is a historic church with Norman architecture, but the stained-glass windows here require a special mention. They’re the last works of Folon.

The are 3 major places to visit in Han-sur-Lesse - Rochefort, Domaine des Grottes de Han and Lavaux-Saint-Anne. Rochefort is one of the easy places to visit by train to Rochefort-Jamelle. Right there, at Jamelle is the Centre of Rail & Stone, because this very region, once had the Railway Maintenance Workshop. A bit ahead of Jamelle is the town of Rochefort. Some of the Rochefort attractions include the Tourist train, Malagne Archeopark, Rochefort Castle (Chateau Comtal) and Lorette Caves. Lorette Caves is considered the sister caves of Grottes de Han. The guided tour of Chateau Comtal is one of the best in Wallonia with its guides dressed as witches and get you to participate in a role play, as a part of the tour!

Domaine des Grottes de Han is my personal favourite place to visit in the entire region. It gives a flavour of what La Calestinne is about, all in one place - from the wildlife of the region to the stalactites & stalagmites in the caves, to the rivers that sink & flow underground to the resurgence of the rivers to the greenery of the region to the rock formations - it is La Calestinne in a nutshell. If that’s not enough, there are 2 museums to talk about prehistoric times and the life of the people in the 1900s here. Plus, if you’re into hiking head to Resurgence d’Eprave to see the reappearance of the river that sinks in the Belvaux Chasm inside the domain! As I said already, it has a bit of everything that the Geopark stands for in the same place!

Lavaux-Saint-Anne is one of the charming, instagrammable castles of Belgium. The history of the castle dates back to 13th C CE but was then a simple watchtower. The fortification was later expanded, but in 17th C it was transformed into a fortress styled palace. However, by early 19th C CE, it fell to ruins. It was renovated and rebuilt in the early 20th C CE.

DID YOU KNOW? You could easily explore the Ourthe Valley from Durbuy to Han-sur-Lesse without a car? Here’s our Marche-Liege Car-free itinerary that includes this region. 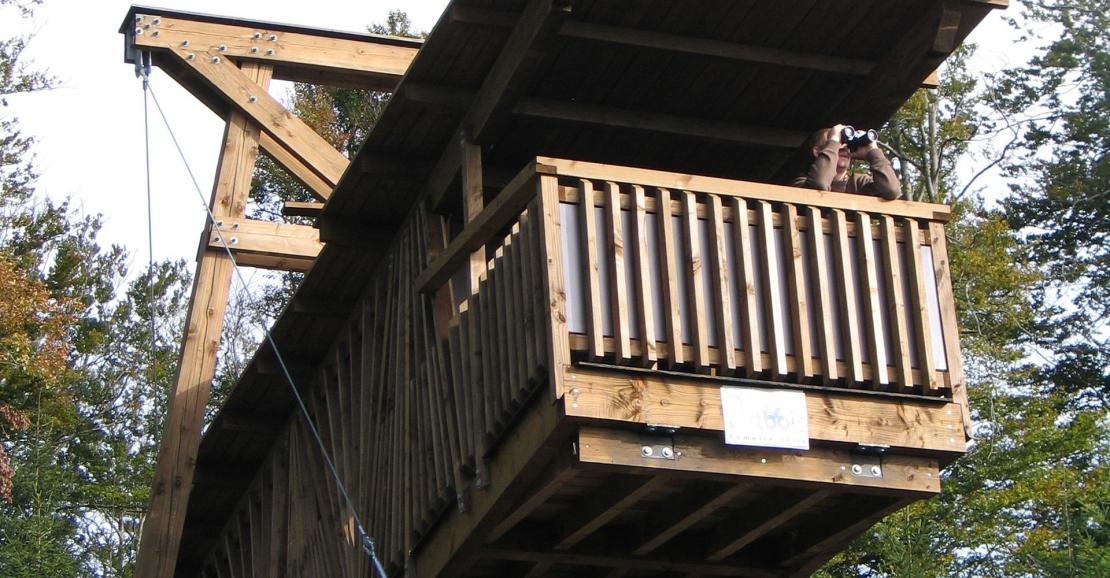 Nassogne is a part of the Grand Forest of Saint Hubert and is entirely a forest region with many hiking paths. One of the awesome features of the hiking routes in Nassogne is the presence of quite a few observation points (miradors) & hide-outs. These blend well with the nature around, making them an ideal location for observing the fauna in the region, especially the deers!

Nassogne could also be the base to visit Ambly and Grune which are 2 more of the beautiful, picturesque villages of Wallonia. There are absolutely adorable with charming little castles, old half-timbered houses, old mills and more. Just in the outskirts of Nassogne is Fourneau Saint-Michel, a very interesting museum dedicated to the ways of life of the people who lived in the region a few centuries back. 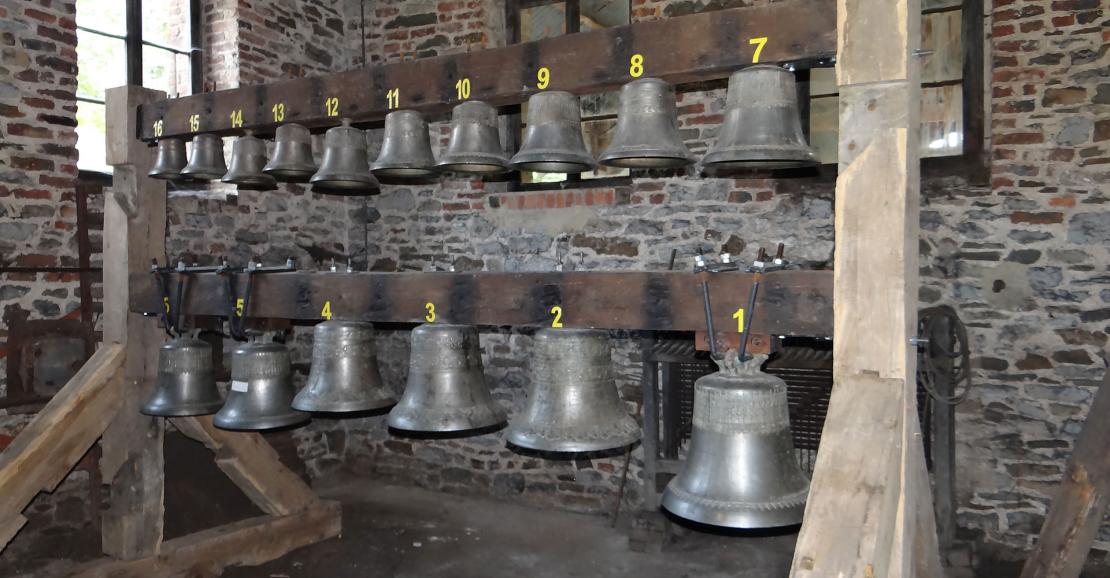 Like Nassogne, Tellin is also a part of the Grand Forest of Saint Hubert and has some of the very interesting hiking paths in Wallonia. Tellin is also where the church bells were made by the traditional lost-wax process. The Causard-Slegers bell foundry’s bells had been installed in several churches all over Belgium, Germany & Luxembourg during the last 2 centuries. A hike from Tellin town centre takes you to Rocher a Pic viewpoint and Our Lady of Haurt Chapel. The entire hiking path and the viewpoint and the chapel are all incredibly picturesque. The entire hiking path connecting these places is about 11km, but the effort is totally worth it! 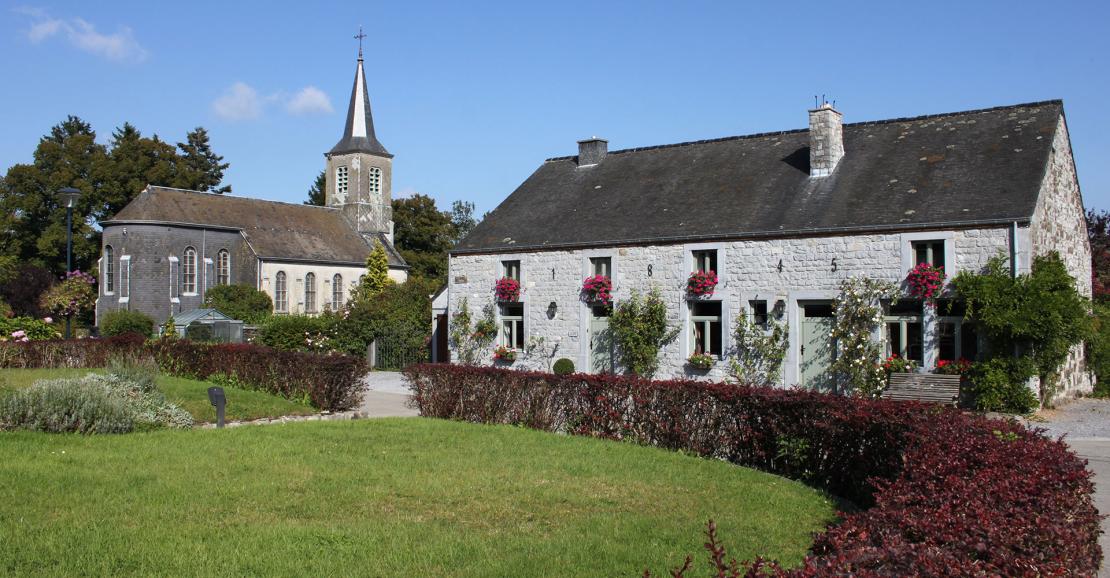 Similar to Nassogne and Tellin, the Grand Forest of Saint-Hubert extends well within Wellin as well. Wellin and the surrounding regions are best explored on a bike. Very close to Wellin is Sohier, one of the plus beaux villages de Wallonie (most beautiful villages of Wallonia). Nearby is FroidLieu, another one of the very picturesque villages of Wallonia. FroidLieu is the home to not only a charming church but also a Merovingian necropolis.

Beauraing can be easily visited from Brussels with the availability of direct train. The most important place to visit in Beauraing is the Sanctuaries of Beauraing where the apparitions of Virgin Mary took place. There’s a little chapel, a church and a crypt here as well as a little Marian museum. Apart from this, there’s the Castle Saint-Marie and the communal park of Saint-Pierre. About 7km to its south is this charming, little village of Voneche. The whole village is just 7 streets but the historic importance of this place is huge - this is the birthplace of European crystal. In fact, the world-famous Val Saint-Lambert had its beginnings here!

Since this is a very vast area, there are many interesting hotels and unusual accommodations in the entire strip. Since the region is mostly a wooded area along the river, there are many camping grounds here. Some of the very unique places to spend a night in UNESCO Geopark Famenne Ardenne are:

About the Author: Bhushavali is an Indian travel blogger, currently living in Belgium. Her background in art history gives her the interest and insight to explore the historic & heritage sites in Belgium. Her primary interest is UNESCO Sites and she has visited 14 of the 15 Belgian UNESCO World Heritage Sites as well as the UNESCO Global Geopark. Visit her blog here: My Travelogue by Bhushavali.